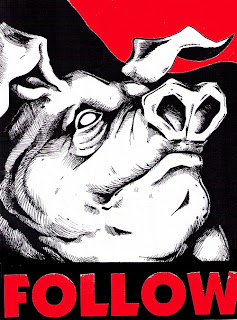 “The wait will be two hours and twenty minutes,” she says, looking behind them. “But you can’t wait here. We’re full.”

It’s busy. It’s dark. The music is industrial. The buzz of excitement is as thick as the fire-and-pig-filled air.

“No problem,” they say. “There’s a bar around the corner, we can go for drinks.” They’d arrived early, anyway, so it’s fine.

They go and have some drinks.

Two hours and twenty minutes pass. They were expecting a call when a table was ready.

Another twenty minutes and there’s still no call so they go back to the restaurant.

“No, you’re table is not ready. Look how busy we are.” Her arms sweep emphatically. “There are still four tables to seat before yours,” she spits. Perfume and sweat mix with pumped cooking fumes in the hot air.

“It’s just us, all we want is a drink at the bar while we wait for the table.”

She breathes out a long, frustrated sigh. “I guess.”

She spins on her worn-down heels. A tattoo stains her calf. Her hair is half-shaved.

“I heard someone say that it’s excellent.”

She stomps towards the bar. She doesn’t talk to the manager. She just walks a circle, head high as she looks down on the diners around, and then returns to the front desk.

“All we want is one drink. We can see there’s room at the bar, look, just there. Plus this way we’ll be here when the table’s free.”

She takes two steps, points at the empty bar then goes back to her gatekeeper podium on the front door.

One variety of Champagne is served next to one can of hipster lager. As they take the first sips from the jars they are served in they are pointed to a table.

They sit. There is no cutlery. No menu. No water. No decoration. Just napkins. The table is uncomfortably small.

“What do you want?” Says the waiter; young, angular hair, thin arms, listening to his iPod.

He looks around, incredulous, as if no one has ever asked this before.

He shakes his head. Haven’t these losers read the reviews, haven’t they followed the tweets, seen the pinterest. He points at his shirt.

It’s pig cooked over a pit.

They should know this. They should’ve read the reviews. Why else would they be here.

Now his job gets exhausting; he has to explain the damn obvious: “Choose a part of a pig. It gets cooked on a pit.”

“What are they eating over there?” They ask.

“But one’s got something in a roll, the other has, like, a stew-thing.”

He almost walks away. He swears and sighs silently. “Fuck... No. Pig Pit.” Emphasis punched on the pig. “You just tell me the part of the pig you want and I bring it for you. Pig only.”

“Prices? What, like how much it’s gonna cost? People don’t normally ask, they kinda know the policy.”

They have no idea what this means.

He stares at them. Waiting. Foot tapping. He writes OBV on his forearm.

“Thirty three pound each. Eat what you want. Drinks extra, obviously. And service.” He smiles. Just.

“And we pay that much for whatever we eat?”

He shrugs his shoulders. What part don’t you understand? “Do you want to order or not? I’ve got...” he trails off his sentence pointing around at nothing in particular.

“Nothing else?” He asks as if they’d stupidly under-ordered.

“And?” He doesn’t write the orders down. Just half-listens.

He leaves. The air feels thick and fatty. It stings the eyes, filling them like grease.

All the tables are busy. The pumping beat of music is like an old factory engine. The popping sucks of a sticky finger echoes around. The gnaw of meat from the bone like a lion chewing a deer leg. Pig juices are wiped from chins. Talking with mouths open. Ripping ribs from smoking slabs. Pulling pieces from teeth. Angry, delighted eating. Greed and speed.

“Excuse me?” They ask. “Where are your pigs from?”

“What?” The waiter replies, taking his headphone from his ear.

“The pigs. Where are they from?”

“What breed are they?”

“What breed? Jesus, how would I know that. They are pigs. Pink, go oink, lie in shit all day.” He walks away, stops at the bar, leans weakly on it, lazily exhausted, shakes his head and tells the disinterested, over-tattooed bartender where he’d rather be and what he’d rather be doing than being in this fucking pig sty.

“Fuck that was amazing,” says one departing diner, wiping his lips with a tenner and dropping it on the floor. “Fucking love pig.” His date is tweeting or tumbling.

Two other diners wipe their hands clean before sliding and poking at iPads. City suits sit next to the fashion let’s-be-seeners. Eating with a phone in one hand, a rib in the other. Everyone takes photos.

“I need to pee.” Says one of the group. They get up and follow signs downstairs where it gets hotter and hotter nearing the furnace of a kitchen. It’s dark down below. The orange glow of the pit licks out onto the hall.

The pigs are here. Maybe 20 of them. Massacre at Animal Farm. Dull pink, eyes closed like they’re sleeping, squashed on top of each other.

A chef, hands covered in dried blood, throws a pig over his shoulder then slams it down on the kitchen surface, taking a saw to it.

Back upstairs, one table is immediately replaced with another, money floats in the air like colourful confetti.

People talk loudly. Shouting favours whispering. Things are done fast as if there’s somewhere else they need to be.

“We waited for three hours,” someone says. “Wow, that’s good. We waited four!” “It’s totally worth it.” “It’s fucking delicious.”

The food arrives. Big smoking trays of meat are dropped on the table. The fat is puckered and black. Smoke spirals upwards. An ooze of something seeps onto the plate. The different cuts are unidentified; the bartender offers no support.

Our four eat. They pass around the hot dogs. “I’m so hungry.” “What’s this thing?” They take a bite of rib, pulling meat from bone. Slowly at first, the second bite is faster, the third is torn away. The sweet-bitter edge of smoke laces everything, bones are discarded like stained ivory keys. The ribs disappear in seconds, the hot dogs are gone, they chew on the cheek and rip apart the bacon. The snout is split open and barely shared. They don’t speak, they just eat, mouthful after mouthful, gulping beer in between, licking sauce and burnt bits from fingers, until nothing is left but bones.

“Totally worth the wait!”

The bill is slapped on the table, the plates taken away. They each throw cash into the middle of the table as they down the last mouthfuls of beer.

The waiter takes the money, counts it, leaves.

As the four walk out the pass the front desk where the girl is drawing on paper covered in phone numbers.

Outside they look back into the grey, smoky pit as people stuff themselves with pig parts.

“Have you heard about Comb Claw? It’s a new chicken place. We should go next week.”