My word of the year: Clean 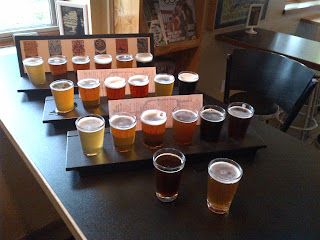 If one word defines the way my taste has evolved this year, then it’s ‘clean’.

Beer is perpetually in motion. Always evolving. And drinkers move like a school of fish around it, swaying one way and then another with the current. Right now feels like we’re at a launching point (though it seems like it’s felt this way forever, already). But there’s things between now and next.

A lot of the beer we drink tastes obvious. American Pale Ales, IPAs and Black IPAs are the styles which continue to grab attention. But I think IPAs are elevated in status simply because they have big flavour, regardless of how great that flavour is. And the flavour is obvious. A sniff is like slamming your face in a bowl of over-ripe citrus. That’s fine, good in many cases, but it’s easy. And it hides a lot of problems.

Which is another issue: there’s a lot of average, bad or faulty beer sold in the UK. There are over 1,000 breweries in Britain now. That’s a lot. Maybe even too many. And the quality isn’t high enough in many. I’ve had too many beers with diacetyl, sulphur and acetaldehyde in them. A beer with no faults that tastes a bit bland has become more appealing than an over-hopped beer that is badly brewed. It seems like the search for impact has forgotten one of the key elements of beer-making: time. Just a little extra time and these beers could be better.

So my taste is towards clean beers. I want simple done well, I want subtlety and depth, I want to have to work with the beer not just sit back and let booze or hops beat me up. I think too many beers are obvious tasting – they are one dimensional and exaggerated in their flavour profile as they slam into your senses. The photo above is all the beer on tap at Odell's taproom. If you want clean, full flavour, then that's the place to go.

Clean, to me, means technically faultless, it means a clarity of flavours, an articulate, precise kind of taste in which you can drink it and experience all the elements in a clear way and not a riot of flavours which overpowers or a muddiness which means the ingredients are making a noise instead of playing a fine tune. It’s about elegance.

And you can absolutely get clean elegance in full-flavoured beer. The best IPAs have got structure, depth, hop flavour and aroma yet you can precisely taste everything, but they have this flavour from using the right amount of hops, at the right time, not simply by using lots of them.

The best Bitters I’ve had this year have had that see-saw brilliance between chewy malt and dry, bitter hop. The best lagers are defined by their clean depth of flavour. The best stouts have texture and that bittersweet mix of pale malt, dark malt and hop. The best sour beers sway between tartness, funk and something holding it all together. Think about the best beers you’ve had. What made them stand out? I bet it was the way in which all the flavours just worked wonderfully together and they left a beer which had a real clarity of flavour.