What beer would you pair with it? 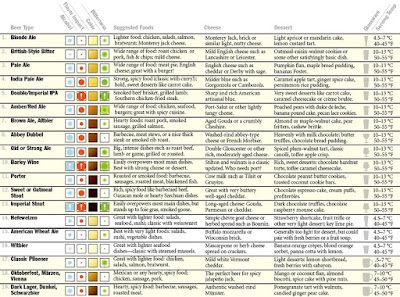 I’ve always thought that food would be what propelled beer into the minds of the masses. A couple of newspaper columns or a TV show, centred on beer and food, would elevate beer onto the same lofty level as wine, lifting it to be the alternative choice, something not to fear and instead something which adds genuine variety and a wide range of flavour to the eating experience.

But it hasn’t happened yet.

For four years it’s been like ‘it’s coming, I can feel it’ or ‘we’re really close with beer now’. But still we wait. The food and beer thing never gets that attention we’ve been expecting or hoping for. Yeah, there’s the occasional moment of breakthrough, but it’s never enough to make it consistent, or it’s presented by those who don’t know beer as well as they know other drinks or food.

Yet beer is cool right now. It’s a hot trend – it’s got provenance, it’s seen as something changing, challenging and exciting, people are getting interested in it and it’s an affordable luxury. To know about good beer is like knowing how to fillet a fish, choose between a thyme and rosemary and eat with chop sticks. Beer, like the others, takes a little effort to understand it, but once you get it you realise it’s easy.

With the growing interest, is aligning the meal table with the beer glass the right way to go? There’s a lot going against it: old fashioned prejudice is like a big bouncer on the door with arms crossed; it’s a default mindset thing – beer is for the pub or for curries and pizza while wine is for the dinner table or for finer foods; it’s difficult to educate people onto something new. Visuals are another thing: I think 500ml bottles are very unappealing (Fuller’s and Thornbridge are classy and sleek exceptions) and much branding leaves beer looking like it’s wearing grubby jeans and a worn old t-shirt (thankfully some hit the smart-casual middle ground). But at the same time, beer is the relaxed drink of choice and pushing it towards shiny cutlery and china plates formalises it, forcing it into a situation which it isn’t comfortable in.

Prescriptive pieces which say lager is like white wine and stout is like red wine are tiresome now and makes me think that I should just have a white wine. Likewise, I’m not sure how many more times I can read the cut, compliment and contrast approach – is that the best we can do? It’s the fun things which will put beer and food together, the natural and casual alliance. Like Leigh’s food and beer pairings – always simple and always good, it’s normal food and good tasting beer and it somehow feels happily coincidental and serendipitous that they’ve come together.

Beer and food is an important idea together but it hasn’t kicked on yet so maybe we need a new approach. Until it feels natural and normal then beer and food is always going to feel like we’re promoting something which isn’t ready for the top job (even if we know in reality that it could do it) or which is getting attention as a novelty idea. Maybe that TV programme will come soon. Maybe that column will be hitting the papers. Maybe not.

I love beer and food together. I’m not going to stop matching them as I like doing it. I also do still think that it plays an important role in the appreciation of beer, but perhaps that appreciation comes through learning more about beer on its own, backed up by knowledge of food in general, rather than ‘try these two together and you’ll discover that you do like beer, after all!’ Beer dinners are great as they introduce the idea of beer and food, but making it overly formal is a step in the wrong direction.

Does beer need food or do we just keep throwing bottles at it in the hope that one day we’ll get something back from it? What do you think?