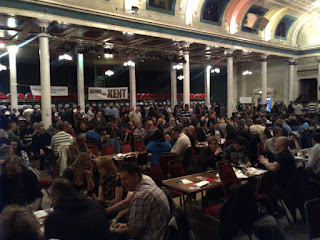 I go with the intention of trying as much new beer as possible. I get there, grab my glass, and go for an old favourite to get started – Gadds’ No. 3 (properly English with that mouth-coating background of malt, a distant sack of apples and pears and the epitome of balance). This makes sense. It’s a little warm-up before we properly get on a beer tour of Britain.

Finding a seat, I read through the beer list and scribble some notes and ticks and arrows, just to make it easier for later when I’ve been up and down the bar a few times – it’s about drinking tactics.

So I start with No. 3 and then I fancy another Kent beer because the festival is in Margate. I’ve been reading about steam beer recently so went back to Gadds for a Common Conspiracy – the body is bulky yet refined, it’s dry and has a brilliant candy and floral aroma; a little taste of San Francisco in East Kent.

From now I’m off on my beer tour. There’s names I know and those I don’t. From Ramsgate Brewery I get about 30 miles away to Hop Fuzz, a new Kent-based brewery. I order The American, 4% and made with US hops. “Do you want to try it first? It tastes weird,” says the guy serving. “What’s weird about it, I ask?” When the reply is “tangy and piney” I expect that I’m getting a huge hop bomb the likes that this man on the bar has never experienced before. Instead it delivers more phenolic smoke than a bucket of Laphroaig, so I order Williams Bros. Ceilidh instead. It’s super pale, sweet first then comes a doughy, almost chocolately note, followed by fresh grass and a clean bitterness. It’s good but lager in cask...? I think I’d rather take it on keg.

It’s then back down south and to Kent Brewery where Summer Wheat was an intriguing mix of light esters (banana, clove) which strike at exactly the same time as the big dose of German hops which instead of giving a delicate finish makes it rocket off in an unexpected direction. It’s a brilliant little tongue twister of a beer.

And then my beer of the festival. Made by Canterbury Brewers at The Foundry (a cool brewpub), Hoppin’ Belgian is the best example I’ve tasted of Belgian yeast and American hops getting it on. I hate citrusy C-hops which clash with clove in most Belgo-American beers but here it was beautifully done – an amazing aroma of mango, tangerine and pineapple, super juicy, then more fruit and fruity esters with no nudge from the phenolic side, just a faint spiciness which lets you know it’s definitely Belgian. It was so good I had another. And I almost went back for a third half. (Canterbury Brewers’ Red Rye was also one of the best beers on the bar. A sweetly nutty aroma plus a little rye spice then zesty and punchy from the Chinook and Citra.)

Summer Wine’s Diablo IPA almost split my tongue in half with brutal bitterness so a Bristol Beer Factory Milk Stout came along to sooth with its chocolate milkshake vibe, light roastiness and delicious balance – it’s a fun beer and I really like it.

Then looking back over the beer list and the ticks it’s more Gadds beer, more Bristol, more Dark Star, some Otley. Outstanding’s SOS gave the beer tasting note of the day: ‘like gunning Persil from a sponge’ as it was so bitter. Another cask lager, Peerless’ Storr, was unfortunately a glass of butter which was dumped and swapped after one sip. There was a Stewart beer, a Thornbridge, Tryst, a Waen and a Crouch Vale Amarillo – all breweries and beers I’d had before (except the Stewart Coconut Porter which I can’t really remember drinking...).

My intention to drink far and wide didn’t really happen, looking back. Or it did happen but it was down roads I’ve been on many times before. I stuck to the breweries I know and trust and when I left that safe path I got hit with diacetyl, TCP, too many hpos or just boring beer. But I got to drink a lot of excellent beer from the breweries I know and I’d rather play safe and drink a beer which I know is good (or from a brewery I know make good stuff) rather than risking something new from a brewery I’ve never heard of – that seems to be where my drinking is now.

I think there’s a Premier League of breweries in the UK and when their beers are on the bar it’s hard to ignore them, even if I’m looking to try new things.

The photo at the top is the beer festival 15 minutes after the doors opened... Seriously.
Posted by Mark Dredge