The Session #21. What is your favourite beer and why? 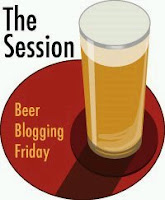 This is my first entry into the monthly beer blogging event known as The Session, and it’s a bloomin’ tough one, posted by Matt at A World of Brews. It’s the question I’m most frequently asked when I say I write about beer, and it’s the question I most frequently shy away from answering.
I don’t like to answer the ‘favourite beer’ question for a number of reasons. Firstly, it’s so difficult to say just one out of all the beers I’ve tasted. Secondly, I don’t want to appear snobbish or geeky, reeling off a list of obscure brews from around the world, and conversely, I don’t want to sound ‘uneducated’ or boring by choosing something that everyone has heard of. Thirdly, I see the question as something that I will always be searching for; I don’t think there will ever come a time when I think to myself, “Okay, that’s it, I’ve found my favourite”, because then what? In all honesty I think that my favourite beer is one that I haven’t tasted yet, but that’s shying away from a proper answer.
I think that my ‘favourite’ beer should be the one I would always turn to - a desert island choice. Something for any occasion, on any day, for when I’m in any kind of mood. It’s the beer that I seek solace in and celebrate with. It’s something familiar and comforting while at the same time exciting and new with each mouthful. It’s like being in love, I guess you could say.
So my favourite, or at least the one that I’ll choose today, is a pint of Fuller’s London Pride. It’s not a rare beer, it’s not the best beer that I have ever tasted, and there is nothing particularly unique or special about it. The only provision; it has to been impeccably kept.
I can trace my love back to a particular moment in a backstreet boozer in West London. I walked in and was upset that they only had Pride available, but I ordered it anyway. It was, you could say, an epiphany. I had had Pride many times before, but this one was different. The beer was a glass full of perfection. It was fresh, fruity and crisp; cool yet comforting. I’ll never forget the overwhelming flavours of fresh bread and blackcurrant, with a gorgeous malt middle and smooth, clean finish. I expect I drank it in a few glorious gulps, only surfacing for air to cry out how good the beer is before quaffing some more. Since then, whenever I’ve had a decent pint of London Pride, I still get that excited feeling, the one which fills me with content.
It’s a good topic, and it’s always fascinating to hear what other beer lovers say. Maybe I shouldn’t shy away from answering the dreaded ‘favourite beer’ question anymore. Maybe I should Proudly embrace it.
Posted by Mark Dredge